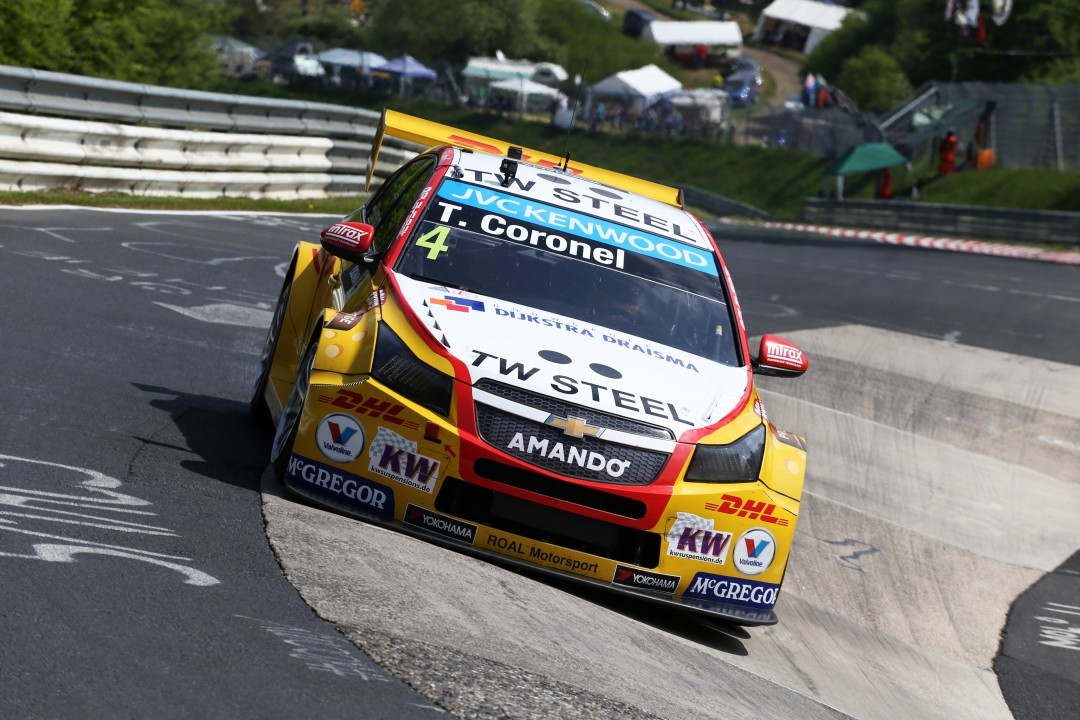 Quite a number of the WTCC drivers use the first appearance of the Word Touring Car Championship programme in the ADA Zurich 24h-Race support programme for making a double appearance. As two sprint races aren’t enough for them, Rob Huff, Tom Chilton and Tom Coronel also will contest the endurance classic. And the World Championship debut at the Nordschleife also seems to be highly interesting for the 24h-race drivers: the acknowledged Nordschleife experts Sabine Schmitz and Jaap van Lagen will make guest appearances on the WTCC grid. That’s what the aforementioned drivers say about the double burden, the differences and the similarities:

Rob Huff:  “For me, this is a great opportunity to race the Mercedes-Benz SLS AMG GT3 for Team Premio. A really great car that doesn’t surprise you with any bad habits. Driving this car on the Nordschleife is just great.  When getting back behind the wheel of my touring car I always have to re-adapt as it has got front-wheel drive. And you always realise that it has its problems when it comes to coping with the Nordschleife. In certain sections, the driving the car rather resembles a rodeo ride on a wild bull.”

Tom Chilton: “Yokohama were the initiators of my double appearance. The adapting effort isn’t too big as both my WTCC-Chervolet and the Audi TT RS are front-wheel fe is clearly easier – thanks to the bigger engine and the bigger tyres. But it has to be like that if you want to be able to complete two-hour stints, in the 24h race. I achieved nearly identical lap times, with the two vehicles but I have to admit that I will have to take the car to its very limit, in the WTCC races. But that’s okay for a three lap race. With the respective set-up changes, the Audi certainly could be faster but then, it wouldn’t be fit for an endurance race.”
Tom Coronel: “It’s just huge fun. The Mercedes-Benz SLS AMG GT3 virtually is tailor-made for the Nordschleife. To have the chance of competing in both races represents a unique opportunity and there aren’t many drivers who contest both the races in a support series and the 24h race itself. Adapting and readapting doesn’t represent a major effort and the brake points are virtually the same: on the one hand, the SLS produces more grip but on the other, it’s faster and heavier than my WTCC Lada.  You just mustn’t forget to press the button in your head and realise what car your just are racing in.”

Sabine Schmitz: “For me, as regular driver of rear wheel driven cars, adapting to the front wheel drive represent a huge challenge. Apart from that, it isn’t to exhausting – aside from the long walks from garage eight to the helicopter landing field and the WTCC paddock and vice versa. But adapting is my biggest problem as you always have to go easy on the front wheels, in WTCC – not matter if you are braking or accelerating. In the beginning, I drove the WTCC car like my Frikadelli Porsche and think that the Chevrolet engineers never saw this kind of brake values, to date. But despite my adapting problems and the difficulties to find a good set-up, competing in WTCC big fun. I wouldn’t mind if the series would come back, next year.”

Jaap van Lagen: “Contesting both the 24h race and the WTCC is somewhat exhausting but I created a good schedule for myself. Therefore, I can cope with it. My cars, the Mercedes-Benz SLS AMG GT3 and the WTCC-Lada, are two completely different vehicles but I’m accustomed to driving different cars. So far, everything went fine. In the free practice session I even was faster than Rob Huff.“