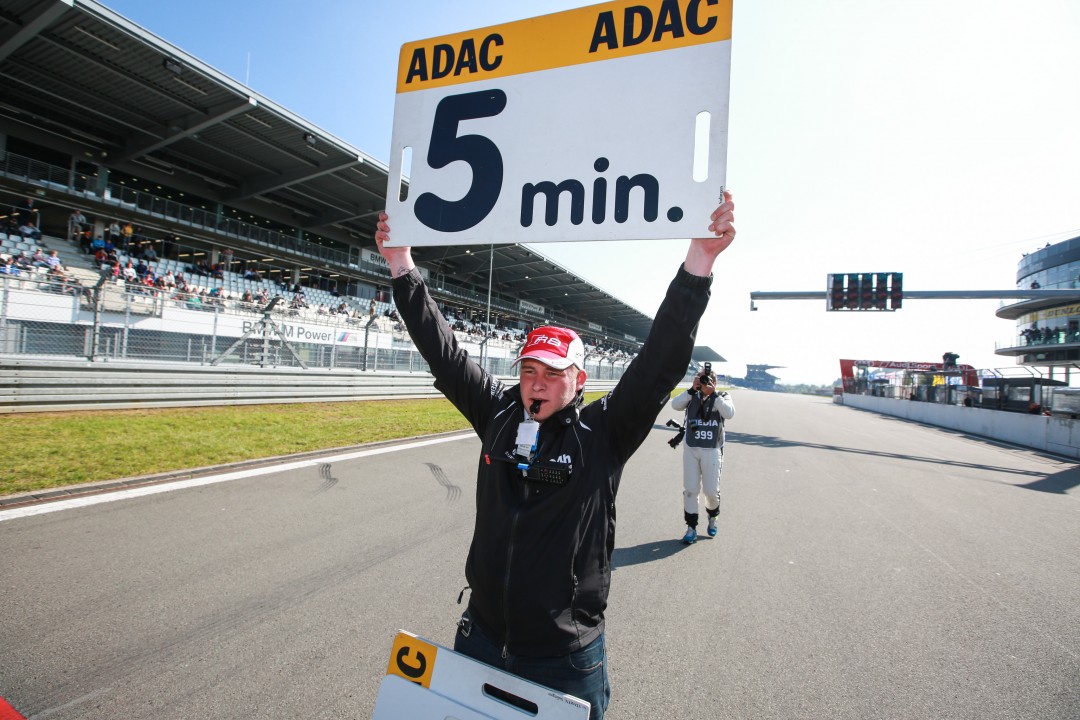 A titanic team is involved in organising the ADAC Zurich 24h Race. Both on and aloof from the track, huge efforts are made to once again make sure that the event will be a success. Organisation, marshals, the safety staff and the competitors themselves – they all contribute to the success of the legendary event.  Birgit Arnold from the motor-racing office and Manfred Strack, operational head of project of the world’s biggest motor-racing event provided us with impressive figures.
Race control
40 Is the number of the race-control team staff members, with the Race Director, Head of organisation, Head of the track safety and medical-squad leader as well as the secretaries and assistants of the race control representing the inner circle.
120 Additional persons are working for the extended organisation, such as the stewards, scrutineers and the technical committee as well as the document-acceptance and driver information helpers, welcome centre /check in and ticket deposition, time-keeping, presentation ceremony, Parc Fermé, camping organisation, support programme, runners etc.
Marshals
950  Marshals are – working in a total of 17 sections – positioned all around the Nordschleife. The coordination is executed by 32 section chiefs and their deputies.
90 Marshals are working in the pit lane. Since 2014, they have been wearing protective gear: fireproof overalls as well as helmets, reflecting armlets and vests.
40 Marshals have their operational area in the paddock where they supervise the activities and make sure that the safety regulations are followed
35 Marshals act as drivers of the shuttle vehicles that are available for teams, marshals, journalists and VIP who want to get from one part of the circuit to another.
30 Marshals are needed for the pre-start and the starting grid, and on Sunday, another 20 marshals will be working in the Parc Fermé.
1.700 visitors from all over Germany will attend the event as guests of ADAC that will hold its local-club meeting in the framework of the 24h race.
Safety
60  Persons are working in shifts for the ‘DMSB-Staffel’. They are on site with 11 S-vehicles.
38 Persons form the intervention team that safeguards scenes of accidents, thus allowing for salvage and rescue measures.  This year, four Audis RS 6 Avant are positioned around the circuit, for this purpose. Furthermore, two Audis RS 3 Sportback and three Audis RS Q3 are used as medical cars that will bring the emergency doctors even faster to an accident scene.
12  Persons are working in the additional E-Unit safety and emergency vehicles.
2 Specially equipped extrication vehicles improve the possibility to rescue competitors that possibly have suffered spinal injuries.
In the case of emergencies
100 Persons form the ADAC Zurich 24h-Race medical service.. They are working in shifts. Eight emergency vehicles are positioned around the circuit, and in addition, a team of emergency doctors, surgeons, anaesthetist, and ambulance men are positioned in the fully equipped medical centre. Another five emergency vehicles, two doctors with emergency cars and more than 30 ambulance men are positioned in the outer area. Several hospitals are on the alert, during the 24h race and an emergency helicopter positioned next to the medical centre is ready to lift off at any time.
120  Fire fighters are on site. Eight vehicles are positioned around ‘The Ring’. One of them at the special ‘petrol’ station for alternative fuels. In addition, there are two fire trucks for the outer area.
Salvage
12 Vehicles – positioned all around the track – are responsible for salvaging stranded competitors. These vehicles comprise – inter alia – two trucks and salvage tractors. Two of the vehicles feature compressors and specially educated staff to be able to quickly execute the necessary repair works in the case of seriously damaged crash barriers.
Nürburgring
80 full-time employees are working on supporting the capricorn NÜRBURGRING GmbH during ADAC Zurich 24h Race. From the track administration to the key issue – they make their contribution to making sure that the huge sports facility with the big number of areas is and remains operational.
600  Helpers of the track operators are needed for operating – for instance – the box offices and the car parks or for the gate controls during the event.
680 Mobile closets have been erected all around the Nordschleife.
60,000 cars can be parked on the car parks around the 25.378-kilometre combination of GP circuit and Nordschleife .
1.5 million Square metres of camping sites are available to the fans.
9km of curbs that all had to be re-coloured – just like the track-side marking (both sides)
6km of construction-site fences for marking prohibited areas
10,000 man hours had to be executed in the run-up by about 60 persons until everything is organised and erected.
Competitors
152 Vehicles will contest this year’s 24h race. This meets the number of cars that are allowed to contest – following the scrutineering – the practice and qualifying sessions. The cars will be raced by some 600 drivers.
188 Vehicles will contest the ADAC 24h Classic Race. In the three-hour race, some 400 drivers will race cars from five decades.
195 Circuit Challenge (RCN) vehicles will kick off the 24h-Race weekend with their 190-minute event. The 190 cars also will be driven by about 400 drivers.
17 Competitors are contesting the World Touring Car Championship (WTCC) that will make its 24h-Racce support programme debut, this year: two three-lap races on the Nordschleife.
24 Vehicles form the Porsche Carrera Cup Germany grid. Other than all the other championship series racing the in the Nürburgring 24h-Race support programme, the Porsche Carrera Cup Germany will contest only one round, this weekend.
Food
30,000 Sausages will be eaten over the course of the four event days all around the circuit – plus three to four tons of chips.
The figures are approximate and the number of people involved can change due to cancellations at short notice or additional demand.  For better clearness, we opted for omitting certain function areas and so, adding up the figures stated will result in a discrepancy. Altogether, some 2,000 staff members are working for the 24h-race organisation.