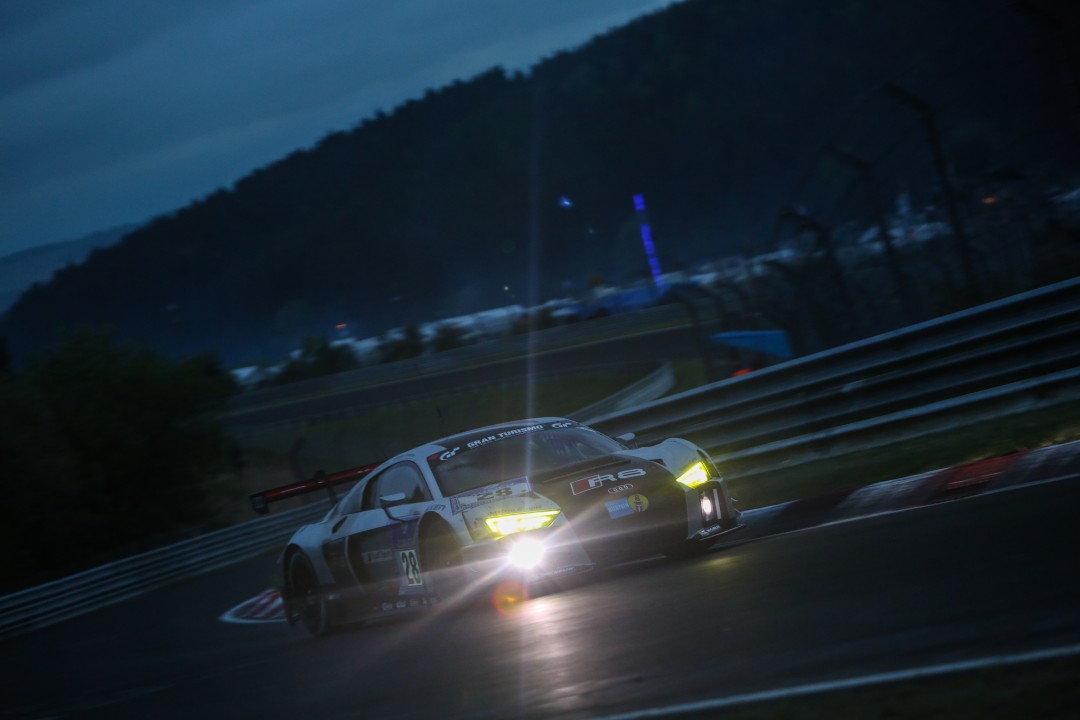 At 5:42hrs, the sun rose over the Nürburgring and after a relatively quiet night, the 43rd ADAC Zurich 24h Race started into its final third. With 15 hours contested, the front runners have completed 94 laps. The lead is held by the BMW Sports Trophy Team Marc VDS BMW Z4 GT3 (#25), with the Falken Motorsports Porsche 911 GT3 (#44) following 1:53.789 minutes behind in second position. Third place is held by the Audi Sport Team WRT R8 LMS (#28). In the meantime, the crowds have witnessed 24 changes in the lead, with the last eight so far having taken place between the three currently leading cars. The fastest Mercedes-Benz SLS AMG GT3, Black falcon’s 5, currently holds fifth position. The colourful brand mix in the top 10 is completed by the Aston Martin Vantage GT3 (#6) and the Bentley Continental GT3 (#11) in the eighth and ninth positions respectively.
1 – Haase / Mamerow / Rast / Winkelhock (Audi R8 LMS)
01:07hrs
Last year’s winners now have been holding the lead for 12 laps.
Altogether, there have been 12 changes in the lead, so far.
01:32hrs
Once again, a race leader is forced into retirement. The reigning champions crash in the Pflanzgarten area. The driver, Christian Mamerow, survives the incident unharmed.
4 – Basseng / Fässler / Rockenfeller / Stippler (Audi R8 LMS)
00:51hrs
The second Phoenix Audi stands in the garage for several laps. The engine misfired and the team now looks for the mistake to possibly be able to avoid the same problem in the sister car.
02:33hrs
Rejoins the race.
02:46hrs
Also retires. Pits and is pushed in the garage for good.
04:40hrs
Basseng: “After the repair of the cable break, the car ran great and we crossed the line in 8:30 minutes on our first flying lap. But there was oil on the track in the Klostertal area and our car went off – at first without hitting something. But the Aston Martin #7 lost it for the same reason and hit us in a waxy that our race was over right away.”